A century after the Star's report, in 1983, the Howell Mountain American Viticultural Area (AVA) became one of the first official sub-appellation of Napa Valley. Where rivers, creeks and property lines usually define an AVA, the Howell Mountain boundaries are defined by a 1,400 foot elevation contour line as the lowest point and the highest vineyards at 2,500 feet above sea level. The vines share the mountain with pines, oaks, madrone and coastal redwoods.

On many summer mornings, a white blanket of coastal fog covers the Napa Valley. Howell Mountain, in stark contrast, rises gracefully above the fog line, giving it slightly warmer nighttime temperatures and cooler mid-day temperatures than the valley floor. While the differences in temperature are still pronounced enough to maintain balanced acidity in the grapes, the steadier climate allows the berries to develop thicker skins that impart intense color, texture and structure to wines.

Howell Mountain itself is a weathered volcanic "knob" with two distinct soils: crumbly white decomposed volcanic ash known as rhyolitic tuff and red, iron-laden soils of clay and volcanic rock. Vines develop good root systems in these well-draining, porous, nutrient-lean soils, allowing them to self-regulate the amount of water they take in. The vines have to struggle to survive, resulting in tiny berries and clusters with very high flavor concentration.

"If any grape growing region in California deserves to be called a well-defined district, it is Howell Mountain."
- St. Helena Star, circa 1880 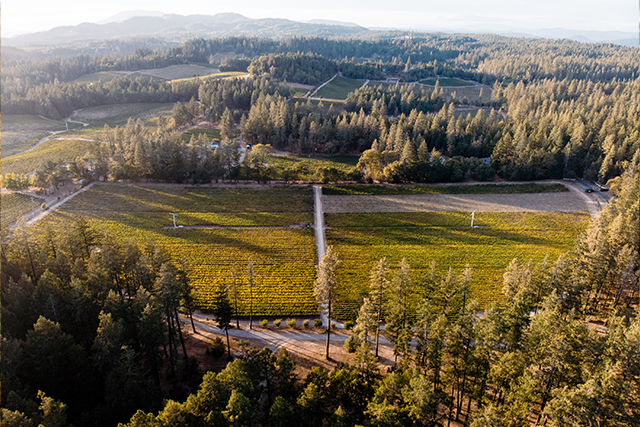